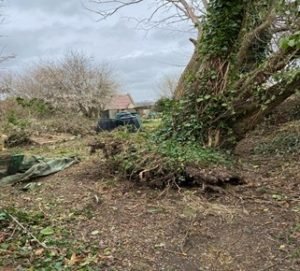 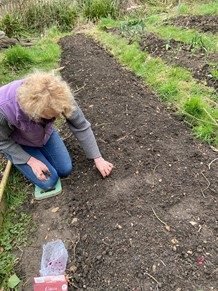 ly no rain last week but cold again. I was greeted with a tree pushed over by storm Eunice (or her brother) so Jane and Steve got to work chopping up branches for fire wood.

We planted onions and beans and generally tidied up the various rows.

Fiona spent some time in the green house, planting out the leeks into pots and we did our usual maintenance activities.

This week we discovered that a small creature, maybe a mouse, had nibbled through a few of the beans stalks so Ruth came up with a rather clever wire covering to protect some of them. We will have to get more wire for the rest but for now we’ve put down twigs to deter the mice. We also saw a cat today so hoping she’ll frighten off any little ones in future!

There were two robins as well, possibly mating but certainly entertaining with their beautiful colourful breasts and courtship. I didn’t realise both sexes had a red breast so I’ve learned something. Actually I’ve learned quite a lot as usual, for example, I was happily repotting primulas until I discovered they were teasels! Ah well…. 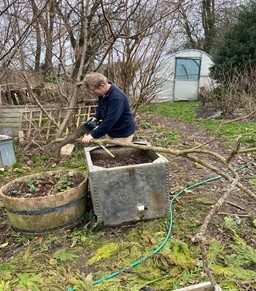